Gender Studies CSS Syllabus 2022 is an optional subject within CSS in Group V and attracted the attention of hopefuls following changes to the CSS syllabus in the year 2016. This CSS Gender studies paper is significant in the selection of optional subjects to be chosen by CSS prospective candidates. Gender Studies is high scoring subject when compared with other subjects that are optional and placed within group V. A total of 100 marks are required for the Gender Studies Paper. The gender studies paper in CSS is classified into group five of the optional CSS examination subjects. Gender Studies FPSC Syllabus for the CSS 2022 is as under. 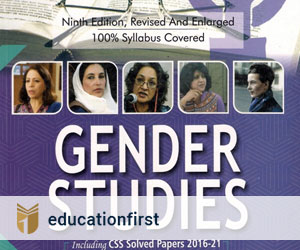 The gender studies section is comprised of 100 marks toward the CSS applicant’s total marks. Gender Studies contain the following syllabus for CSS Examination and this syllabus is published by FPSC. The gender studies paper is comprised of parts A and B which each have 50 marks. It is possible to write your Gender Study paper easily by following the syllabus below and it is a well-rated topic in Group Five.

CSS Syllabus. Subject: Gender Studies. For CSS Solved Past Papers, Date Sheet, Online. Making preparation, Toppers Notes, and FPSC suggested. It is easy to pass your CSS Gender Studies exam with a focus on the core syllabus that covers a variety of topics such as Feminist Theories and Practice, Gender and Development, Status of Women in Pakistan Gender-based violence introduction to Gender studies, Feminist Movements, Gender and Governance, and case studies. Previous papers from CSS 2022 Gender Studies can help a to better understand the curriculum of the Gender Studies CSS Syllabus.

Students who are working on their forthcoming CSS gender studies exam will be able to score the highest scores as it is a sought-after paper in relation to scoring top marks in your CSS final exam. When we review the mentioned syllabus of Gender studies, we’ll find certain subjects that are basic and require very little preparation. However, it should be kept in mind this: Current Affairs regarding this subject can play a significant part in achieving a high score in this area.

It is a great resource. CSS Books is an “Open Digital Library “and a Knowledge-Hub for various tests and exams that are administered by the Federal as well as Provincial Service Commissions. For this reason, you can look into Gender Studies JWT info. The website assists students in their studies by recommending books for every subject that is either compulsory or optional to pass exams like the CSS and PMS exams. Gender Studies CSS Syllabus is presented below in the most straightforward way.

This website is the only source for PDFs for free for the subjects that are listed for CSS (and exams for PMS/PCS). These books cover, Essay, Precis and compositions, Pakistan Affairs, Current Affairs, International Relations Political Science, Gender Studies, Criminology and Government Administration, Geography US and British History, etc. On this site, you will find details about CSS PMS, CSS, as well as another test that is not as rigorous. In short, Genders Studies CSS Syllabus 2022 is available as a PDF. 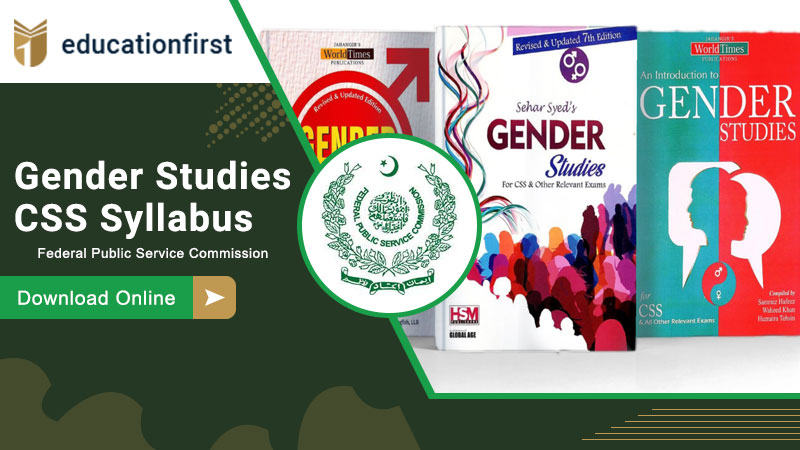 Candidates and CSS applicants need to focus on the solution of CSS past papers in gender studies to get an understanding of the types of questions that will be likely to be asked in the upcoming CSS exams as well as increase their speed of paper attempts by completing CSS past papers on gender studies in the most precise and speedy way that they are able to. While theories can be a bit difficult, a well-planned and regular schedule for preparation can overcome these challenges.

Status of Women in Pakistan

Gender Studies Syllabus to be used in competitive exam CSS is accessible here. Make sure to study the previous exams of CSS 2020 which will bring an accurate picture of the Subject gender studies CSS syllabus 2022. In the article below, you will learn more about Gender Studies CSS Syllabus & PDF Book 2022 and 2022. This website, CSS Books, is fully focused on CSS PMS, CSS, and other competitive exams. Most often, CSS applicants are seeking a CSS syllabus, past papers, preparation Notes, and books, on diverse subjects like Criminology, Gender Study, and more.

Access to these publications is accessible to anyone who wants to read them online and download them for their future study. Gender Studies CSS Syllabus 2022 is an optional subject in CSS in Group V. It attracted the attention of students due to changes made to the CSS syllabus in the year 2016. CSS syllabus in 2016. In addition to the books in PMS and CSS, as well as Gender Studies JWT also has Medical Books, Engineering Books, Law Books, Research Books, and other general publications i.e. Biographies, History, Fiction, and more.

Gender and the Social Construction